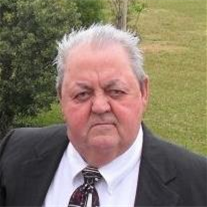 James E. BeDilion, 78, of Beauty, Kentucky passed away at home on Saturday, July 22, 2017. Jim was born on August 5, 1938, in Washington, Pennsylvania to the late William Grover and Mildred Boswell BeDilion.

Jim proudly served his country as an electronics specialist for the U.S. Navy. Upon receiving his honorable discharge from the Navy, Jim went on to work for Hewlett Packard and, later IBM. While living in Florida, Jim served his community as a Mason and Jaycee, where he was eventually elected as a national senator. Upon moving to Kentucky, Jim continued his service to others by serving on the local boards of both the Soil Conservation District and Historical Society.

Visitation services for family and friends will be held from 4pm-6pm at Inez First Baptist, Inez, KY, on Tuesday, July 25. A memorial service will be conducted immediately after at 6 pm.